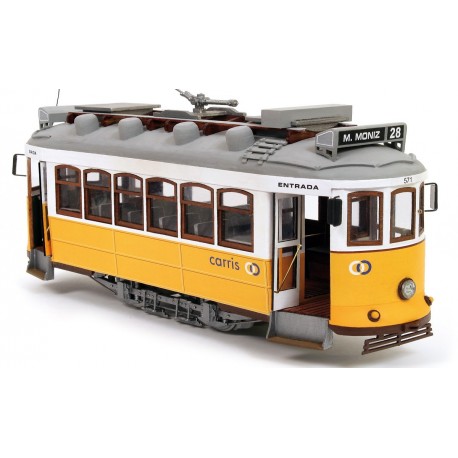 IMPORTANT: Displayed price includes EU VAT tax. For non-EU customers the order price is recalculated at checkout and is up to 20% LOWER once you enter a delivery address at checkout. Use this chance to order TAX FREE.

Shipping Options We ship Worldwide. Delivery costs are calculated at checkout according to order weight and address entered.

Surrender to the thrill and get carried away by the age in which these marvellous trams circulated through our streets.

This tram was originally part of the 701/735 series, of the Compañía de Carris de Ferro de Lisboa, which built them between 1936 and 1940. These trams were considered the safest in Lisbon as they were fitted with a reinforced braking system and were used for the lines covering the most difficult routes, such as 12, 25 or 28, with ramps of up to 12%, which were also the steepest slopes in the world for simple adherence tram lines.

The tram is fitted with five types of brake, pneumatic, mechanical, electric, electromagnetic with shoes and mechanical with shoes. Each tram was also fitted with two powerful, 45 HP, Metropolitan Vickers electric motors and a Brill 21-E type truck, built by Maley & Tauton.

The body is of the standard Lisbon type, based on American Brill designs, with its most notable characteristic being the sharply cambered roof. The tram maintained its original design up until 1985-1987, when the series was reformed and adapted for a single driver/conductor, pneumatically operated doors were installed along with flashing lights and the street-side doors were sealed off. After 1995 the original trams gradually started to be replaced with remodelled Series 500 trams, although a number of units were maintained in operational conditions for charter services and occasional substitutions on the regular lines.

Assembling, step by step, this marvellous kit model of the Lisboa tram will provide you with lengthy and splendid periods of creative leisure, recreating a faithful replica of the original Lisboa tram, with all its details.