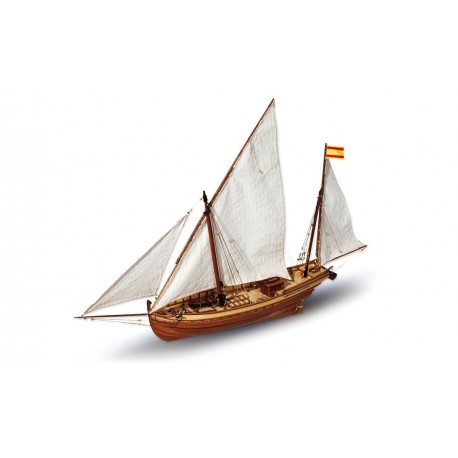 Discover one of the jewels of ship modelling, which will allow you to enjoy marvellous moments and relive the age in which these majestic ships sailed the oceans.

Following the War of Independence, after Spain had lost her American colonies, merchant marine ships all but disappeared from the peninsula, leaving only small coastal sailing boats behind to re-establish the routes to the Antilles.

Through the Royal Decree issued by Charles III, trade was re-opened with those colonies that remained faithful and it was the felucca, “San Juan” (El Glorioso), that made the first voyage.

The reproduction of the model is faithful to the original. Our model kits will provide you with all the elements necessary to ensure the reality of your model ship, down to the smallest imaginable naval detail.

We hope that you will enjoy your love of ship modelling with the felucca San Juan, a splendid model ship that will provide you with lengthy periods of creative leisure.