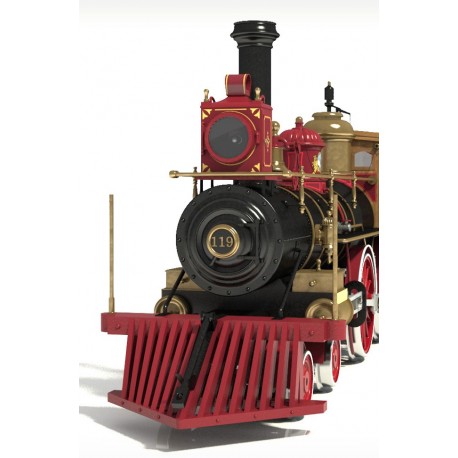 No.119 was parked in Ogden, Utah, when a call from Thomas C. Durant, traveling towards Promontory, alerting needed a locomotive.
Very similiar to the event that befell Leland Stanford and the Jupiter locomotive. Durant, vice president of the Union Pacific Railroad was traveling in the so-called Special Durant for the ceremony at Promontory.

A swollen river had dragged some bridge supports at the Devil's Gate Bridge. The driver refused to cross the bridge with the locomotive for fear that not support the weight of it, but agreed to cross the wagons. The bridge endured and wagons crossed successfully. But they were across the river without engine.

He warned Ogden and No. 119 locomotive was sent for the short ride to the promontory, where he joined the Central Pacific Jupiter.

Spectacular model of the engine 119 along with Jupiter complete a model railway locomotive famous couple.