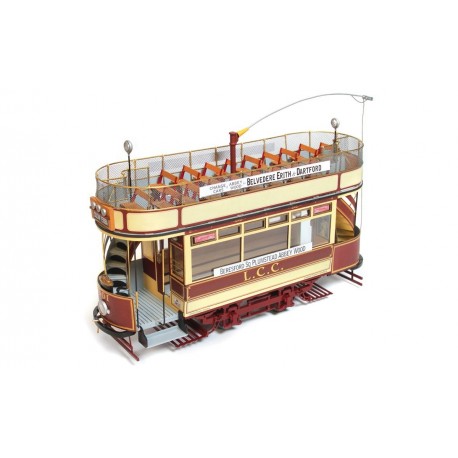 Assembling, step by step, this marvellous kit model of the London tram will provide you with lengthy and splendid periods of creative leisure, recreating a faithful replica of the original Lodon tram, with all its details.

This tramcar was built in April 1903 by the company Electric Railway and Tramway Carriage Works. It was one of the hundred B Class vehicles ordered by the London County Council. With number 106 this car was used as a passenger transit vehicle up until 1925, when it was converted into a snowbroom and given the number 022. In 1983, 106 was taken to the Crich Village National Tramway Museum, in Derbyshire, where it remains to this day, having covered over 10,000 miles transporting passengers.

It was originally powered by Dick Kerr motors, type DK25A, providing 25 hp, which were replaced in 1927 by Westinghouse motors, type 220, providing 42 hp. It was originally fitted with handbrakes on the wheels and rheostatic braking through the motors. In 1908 magnetic track brakes were fitted. Imagine the days of these wonderful trams in the streets.

Surrender to the thrill and get carried away by the age in which these marvellous trams circulated through our streets.