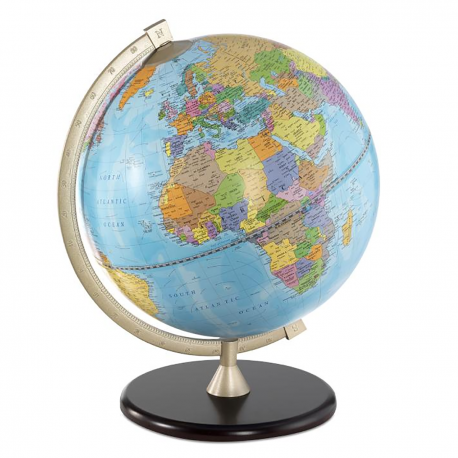 Captain James Cook was a British explorer, navigator, cartographer, and captain in the Royal Navy. He made detailed maps of Newfoundland prior to making three voyages to the Pacific Ocean, during which he achieved the first recorded European contact with the eastern coastline of Australia and the Hawaiian Islands, and the first recorded circumnavigation of New Zealand. From him this desk globe takes its name. The map, updated from our team of cartographers, boasts incredible details in terms of countries and major cities, rivers, seas and mountains. The wooden stand and aluminum meridian give maximum balance and stability.

- Perfect to be placed on a table, a shelf or a desk

The globe as a tool to understand, know and discover the world. The political map is a very detailed cartography for cities and nations, but also for many geographical references such as rivers, seas, oceans, lakes and mountains. To be noticed: every state has the name of the nation written in its own national language, with relative English translation. An original and interesting journey between world’s languages!